The stunning 1922 Megola Sport – a five cylinder, 640cc radial engine with no gears and no clutch. Oh yeah, and the engine was mounted within the front wheel. To start the engine, you put the bike on its stand (which lifted the front wheel off the ground) and spun the front tire. The engine apparently had tremendous torque and although the power output was quite low it was applied directly to the wheel – stock models had a top speed of 85 kmh (52 mph). Sportier models were apparently powerful enough for top speeds of 140 kmh (88 mph). The crank was hallow and doubled as an intake manifold. This arrangement made for a very low centre of gravity and provided excellent handling capabilities.

Unusual in design but was competitive enough in racing to win the 1924 German Championship. 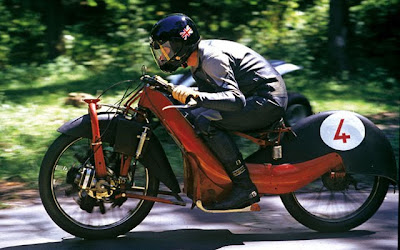 Here is a video of a 1924 Megola being started:
[youtube=”http://www.youtube.com/v/BQa0HQYUSGk”]

More on the Megola here.

How to improve on the Megola

In 1935, five German engineers attempted to design a more streamlined and modified version of the Megola. After three years, the Killinger and Freund was...