Motocross: Motorcycling as an Extreme Sport 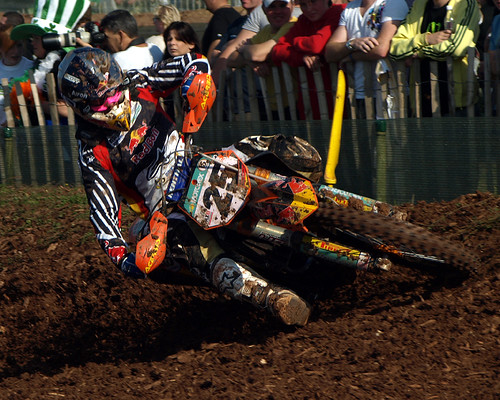 For the uninitiated, Motocross is an extreme sport where riders take specially designed motorcycles around an outdoor off-road track. The track will contain any number of corners, and most have jumps that the rider goes up and over.

Motocross differs from standard road biking in many different aspects. This includes everything from the gear used to the type of riding performed and even how the engine is set up.

Motocross (often written as MX) is a form of motorcycling. Motocross itself is done on an off-road circuit, and involves multiple riders racing each other around it. A motocross circuit contains banked corners (known as berms), many sharp corners and large hills, some of which are used as jumps.

Motocross is a very demanding sport as the whole body is used during competition. Motocross riders need to be strong and agile in order to throw themselves and the bikes around at speed.

Motocross can also be a relatively dangerous sport. It’s not unusual to see a bike or it’s rider on the floor, but due to the good protective gear used and the soft mud ridden on there is usually little very serious damage and the bikes themselves are designed to withstand the punishment.

Motocross itself is just a circuit racing sport, but it has spawned many variants. Trail riding is often done using motocross bikes and gear, but doesn’t involve any racing. Trail riding is simply following an off-road path (or trail) for fun.

Motocross riders wear protective gear very different to that used on the road or race tracks. While road bike riders are often seen clad in a thick leather one-piece suit and Velcro boots, motocross riders will usually wear separate plastic body armour either on top or underneath of a thin breathable fabric. “Roost guards” protect the rider from debris thrown up bike other bikes whilst other padding is designed to protect in the event of a fall or collision.

Thick trousers are worn to protect the rider’s legs from the exposed engine of a motocross bike. Motocross boots are heavy and don’t allow much ankle movement. Motocross boots also have multiple straps to keep them attached in the event of a crash.

While road riders wear rounded aero dynamic helmets, motocross riders will wear helmets with peaks attached. The riders use the peak to help in keeping extra dirt off the goggles. Peaks can be used in motocross because the bikes don’t go anywhere near the speed of road racing bikes.

Motocross bikes are built with a completely different purpose in mind to road bikes. They’re much taller with significantly larger and thinner wheels. Unlike road bikes, motocross wheels are spoked and the MX tyres used are designed to provide grip and traction in anything from mud to sand.

These bikes are built lightweight. They lack the plastic fairing of road bikes and are thinner due to the smaller engines. They have a much more upright riding position with larger bars to give them better handling.

The engine in a motocross bike is usually quite small. It’s common for them to be under 500cc and they usually use a single cylinder. The single cylinder engine provides better torque and responsiveness lower down in the rev range, as opposed to road bike which have all the power higher up.

I hope you enjoyed this introduction to Motorcross racing! If you have anything you’d like to share on the topic, feel free to leave a comment below.

This post was written by James Harper on behalf of Ride Direct who supply a full range of motocross boots and MX tyres.